Apesar dos desafios do mercado, a AFC Geofísica vem investindo desde 2012 em ferramentas de Perfilagem Geofísica de Poços.
In 2012, with investments in new technologies and in the staff, added to the professional experience of more than 20 years in geophysics, we accomplished expertise to serve with quality also the services of Borehole Geophysical Logging, focused on projects in the Mining, Groundwater, Environment and Geotechnique areas.

The Borehole Geophysical Logging is a method capable of generating vertical profiles integrating several geophysical methods in the same point. This technique consists in lowering a probe using a winch until the bottom of a recently finished borehole. On the way up, the probe performs measurements on the walls of the borehole, which can determinate radioactivity, resistivity, magneticity, sonic results and others. After concluding this procedure, a geophysical profile is obtained with the integrated results of all the probes used.
We apply methods which allow us to investigate up to 1500 meters deep:

• NATURAL GAMMA;
The Natural Gamma method is capable of measuring quantitatively the natural radioactivity of the rocks connected to a sampling borehole.
The natural gamma probe is composed by a scintillation detector which performs the rocks total radiation measurements. The gamma spectrometer probe allows us to measure the radiation from the potassium channels, uranium and thorium.
The Gamma profile is frequently used in the lithological characterization, clay fraction definition in the sedimentary package and stratigraphic correlation.

• RESISTIVITY;
The Resistivity method consists in measuring the rocks resistivity variation across the borehole. The measurement system is based in four electrodes, being two from the current transmission circuit and the other two from the electrical potential measurement. The penetration of the method in the well wall is a function of the distance between the electrodes.
The Resistivity method is frequently used in borehole studies for petroleum and groundwater, as well as for contamination evaluations, helping to characterize the environment porosity, quality of the Groundwater and the stratigraphic correlation.

• INDUCED POLARIZATION;
The Induced Polarization method consists in emitting a electrical current on the walls of the borehole, polarizing the local lithology, and right after interrupting the current, measuring the decrease of the rocks electrical potential. The material with characteristics for being electrical conductors as metal, present slower fall of potential than the non-conductive materials. This way is possible to define the existence of ore such as gold, copper and others.

• SONIC;
The Sonic is a method used to measure the difference in the transit time of a mechanic wave through the rocks and also to determine the speed of the wave propagation in the rocks.

The sonic can be used for porosity estimation, correlation between boreholes, estimation of compression levels of the rocks, estimation of constant elasticity, detection of fractures and support to the seismic for the preparation of synthetic seismograms.

• CALIPER
The Caliper is a method capable of measuring the diameter of the borehole and it can be applied in the volume calculation of the cement for buffers or covering, support to formation test operations, quality control for profiles and indication of the borehole conditions in a specific gap.

• MAGNETIC SUSCEPTIBILITY
The Magnetic Susceptibility method consists in measuring it in the rocks which were drilled by a borehole. The abnormal susceptibility can indicate the presence of magnetic minerals such as magnetite, ilmenite and pyrrhotite, helping in the mineral prospecting. The logging uses equipment of the fluxgate type (total field) and nuclear precession (vertical field) adapted to the borehole.
• TEMPERATURE-FLUID CONDUCTIVITY
The temperature-Fluid Conductivity method measures the temperature (-20°C to 80°C) and the conductivity (50 to µS/cm) of the fluid along the borehole. This technique is intensively applied to studies of groundwater, gradient, geotechnical applications, evaluation of saline water intrusions, etc.
• DEVIATION
The measurement of borehole deviation aims to determine its inclination and its azimuth, it is performed using appropriate tools as the PeeWee (Devico) recommended for non-cased holes. 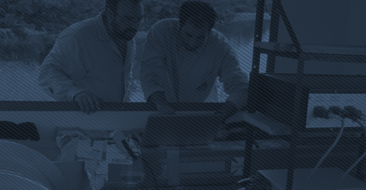